What I learned since last time:

Unfortunately, my boyfriend got a cold, which meant that he didn’t go to work/go to his planned social engagements on the days that I thought I would have had time to play. I tried to encourage him to go anyway without sounding suspicious but it didn’t really work (if he was like, super sick I obviously wouldn’t, but he was still functioning fine). So, as a result, on day 18 it had been nearly two weeks since I had played last, which really, really sucks and is exactly what I’ve been trying to avoid. Two weeks is nothing for him, but for me I was afraid that would mean dropping down several levels in skill – which would mean no more PvP games for a while, for sure.

And it also meant that I didn’t have a chance to try out any of the 20 free champions from last week, except for the one nearly-finished game with Ahri. I’m trying not to show my frustration, because obviously this situation would not be occurring if he knew what I was doing. It’s not like he cares what I spend my time doing when we’re both home – and the entire time he’s been home, he’s just been alternating between watching pro game streams and playing himself. But having the opportunity to play all of those champions even once would have really improved my skills, just in terms of knowing what other people playing those champions can do.

It’s a good thing I gave myself 6 months, is all I can say.

The good news, though, is that I was pretty successful in my mission to learn more about the other aspects of the game like masteries and items. I summarized above, but here’s what I actually did about it:

I decided to build my own mastery pages for my owned champions rather than following a guide due to the fact that I still don’t have enough mastery points to build a full page. Therefore, I think what is best for me now is probably different than what a guide would recommend. When I reach level 30 I’ll re-evaluate.

I also made three pages that just max out one of the categories (only way I can attain any of the keystone masteries at the bottom at this time).

I started working with item sets, and I made one for each of the champions I own based off of internet guides. I’m hoping that having pre-determined item sets laid out for each champion in the shop will save me some time, because I often spend longer than I should browsing around the shop because I don’t know what anything does. (Or I just click on things randomly based on what I can afford at the moment, which is also stupid.)

And as noted above, I created one rune page. I may fill the second one with some different things but until I have access to all 30 slots/can afford higher tier runes I don’t think it would make much difference.

I also made this: 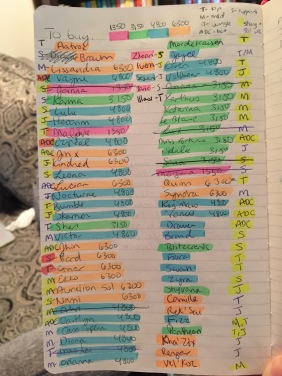 Which I’m sure looks like nothing to true LOL die-hards but for me is, like, the most organized I’ve ever been in my life. In case you can’t tell, this is a list of all the champions that I know for sure I want to buy (even though some I haven’t played) – I’ll add to it as time goes on. It’s colour coded by IP cost. And along the sides are the roles they’re supposedly best at, and they’re highlighted in yellow if the internet ranks them as being strong (although I know that could change at any moment).

I got another surprise a couple of days later – my boyfriend had to go to work for 4 hours on a day he was supposed to be off, so I had time for a few games. I was incredibly eager to find out how all of these changes would impact my games, and whether or not they would actually help or make things worse. (I don’t know how masteries and runes could possibly hurt, but I did worry about restricting myself to the items in a set.)

To be honest, I actually didn’t notice a difference at all. I thought I would at least notice some small improvement, even if I wasn’t sure what to attribute it to. But maybe it was just because I was out of practice.

I only got to try out an item set once because I was experimenting with new champions most of the time. I tried the set I made for Soraka and I don’t think it hurt but I don’t think it really helped, either. I think I need to revisit the way that I build sets, because what I ended up doing was putting in many of the items needed to build larger items, rather than just adding in the final products, so as to save gold. Except, when I was playing the game I couldn’t remember what built into what, so it’s possible that I ended up buying things out of order, if that makes sense. Maybe I should create separate categories for each item’s build path, in order of cost or importance.

I was pleased to learn that the extra 10 Blood Moon champions were still available, but I was sorely disappointed with the new regular rotation. There was only one on the list I was excited about (Morgana, although her name constantly makes me think of The Little Mermaid 2).

I think I’m mostly mad because only 6/20 champions this week are female, and three of them I’ve already played, and one of them I refuse to play because she turns into a giant spider (Elise). She looks cool and all, but ehhhh *shudders* I haven’t encountered her in a game yet but if I ever do, we will definitely lose because I’ll just go afk and cry in a corner. (You think I’m kidding, but I’m not. The last time there was a spider in my apartment I cried for over half an hour before gathering the courage to kill it with a vacuum. This was pre-boyfriend, obviously. Nowadays I would just make him deal with it.)

I thought that Morgana might be the perfect support champion for me because 3/4 of her abilities are attacks and would therefore be expected to be played more aggressively. I do like her as a character (I appreciate her backstory – she reminds me of Anakin in Episode III of Star Wars [my favourite – I know, shut up]), and her Q and W abilities remind me of Veigar, but ultimately I ended up feeling like she doesn’t make that much sense as a support champion. I feel like she was never designed to be support and just fell into that role because she isn’t quite strong enough to make it on her own.

I played 2 games with her, and I also played a game with Ekko. Ekko is like…damn, boy. If I could be attracted to an animated character, I would be attracted to him. I remember my boyfriend telling me about his ultimate a while back, and I remember thinking that it was extremely confusing, but it’s actually really not. I like him, but I was disappointed that he’s not ranged. I feel like he would be perfect if he was. He’s also super motivating! I died, and upon respawning he said, “Let’s not do that again”, and “I’d rather make mistakes than make nothing at all” and I was like, you’re so right.

Here are some thoughts on other free champions this week, even though I haven’t played them yet:

After my time was up, I hit 1350 IP, which meant I could afford to buy a new support champion, which I’d decided previously that I needed to push myself further. I decided to go with Janna because according to the internet she seemed to be the strongest in my price range. Except for Taric, but I will obviously always choose the pretty girl over a pretty boy. Perhaps forcing myself to play her will change my opinion about her. Morgana was also an option but, despite my misgivings about Janna, I do feel like she makes more sense for support.

I think I have diagnosed my Soraka problem. It’s not that I’m playing too aggressively as a support in general or that I’m not supporting the team enough. It’s that I’m more aggressive a support people expect Soraka, specifically, to be, which sometimes causes the ADC to be a little lazier with their effort in getting last hits and kills as they otherwise would be, perhaps. And also simply a difference in skill level at times.  I was reading about different types of supports and I think that I’m playing Soraka as a slightly different type of support than most people do. But if it works…so?

I’ve tried to be a little bit more conscious of timing of my hits and when I use my Q ability  and I think that has helped. But again, it just feels like I’m forcing myself to suck on purpose when I do that, and while my team may appreciate it, I personally hate it and I think that at a certain point it will be detrimental to my development as a player. I’ve actually found that my performance in mid-lane has gotten worse (or not worse, but worse considering how far I’ve come in other roles) because I’m so used to support – I’ve become an expert at harassing the enemy but not actually landing kills.

So, the goal is to master support and then move on.

I should have a decent amount of time to play over the next week, so hopefully by the end of it I’ll have made some real progress.