Things I learned this month:

Hello! Welcome to the first blog post in a month. Oops. I decided to bring back the “things I learned” feature for that golden nugget I just read today…I may reintroduce it as a permanent feature since I’m not posting as frequently, who knows.

Today I’m going over my League Year in Review with you all! I’m sure you’re all sick of seeing these as it seems that everyone and their mother feels the need to share theirs with the world, but supposedly you WANT me to share things with you, so here we are.

I must make two exciting announcements!

The first is that League of Love TV (the stream) is now on hiatus for the holidays! (Can you even really call it a hiatus if it’s so short?) And we will return on January 2nd at 8pm EST! We also have a brand new schedule starting then – it’s not wildly different, but it’s different enough that we hope that a lot of new people will be able to join us. Thank you to everyone who filled out our poll; your feedback is indispensable! View the new schedule here.

The second is that I finally got a job! Some of you will remember from this post that I’d been unemployed for some time and it, along with other things, was really getting me down. But this week I started a new job at the head offices of a large Canadian bank. So far it’s been challenging but I’m actually quite enjoying it because everyone has been so nice to me. All this is to say that the erratic-ness (I’m sure there is a word for this but it escapes me at the moment. I’m a writer!) with which I’ve been uploading videos and blog posts will probably continue, but hopefully eventually I will settle into some sort of schedule, even if it is less frequent. Thank you to everyone who has stuck with me during this time, and if you are interested in our content, I highly recommend actually subscribing both to our Youtube channel and this blog and/or following us on other social media so that you are notified when I DO upload content.

So, let’s get started, shall we?

First, let’s look at my average stats for the support role compared to other Silver players. I was placed in Silver 5 earlier this year, so let’s see how I really measure up.

The most notable gap is probably in ‘wards per game’ – on average I place 8.6, and other Silver players place twice that many. It’s worth noting that none of these statistics are completely reflective of my current skill level because I improved so rapidly within the first 6 months of the year, but still. I’m sure that’s something that I can continue to work on.

Otherwise, though, I’m pretty on par, which is surprising to me, particularly regarding the KDA stat. Sometimes I feel like I belong in Silver, but I often feel like my true rank is probably closer to mid to high Bronze, and that if I had continued playing ranked I eventually would have ended up there.

Next, let’s take a look at how I compare to Gold players in the support role. I would be happy just to end up in Silver again at the end of next season, but my ideal goal is to finish in Gold. Let’s see what I would have to improve to make that happen.

Surprisingly, the stats are…basically the same? Not the exact same, obviously, but they reveal the same insights, which is mainly that I need to place more wards. I feel like something is off here. Surely there must be larger gaps between the Silver and Gold average stats, even for the support role. What do you all think?

I also looked at my average stats compared to Silver players for mid-lane. I definitely don’t think I’m up to par on that one.  And I’m not, but it actually wasn’t as bad as I thought.

Again, the largest gap is for wards placed – this I already knew. tect is always telling me to buy control wards when I play mid. I also do 1000 less damage per minute, probably because I play too cautiously. I mitigate less damage, but I also heal more, so I feel like that kind of evens itself out.

And then there’s the KDA, the part that makes me feel like something about this MUST be wrong – only 0.2 lower?! Are you kidding?! The vast majority of my mid games feature me dying more than 5 times with very few kills or assists. DEFINITELY not meeting my old goal requirements.

Now here’s some other stuff that I don’t really have much to say about, but I thought you might find interesting anyway.

League confirms what we all already knew

The reason why I hate support Lux so much (and to add insult to injury, 184 is my favourite number!) 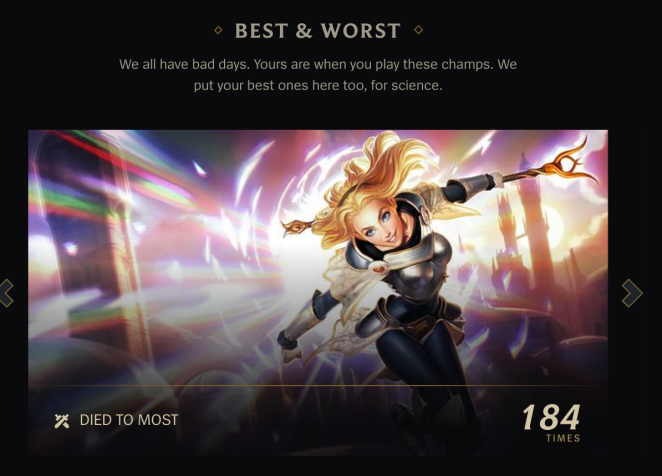 I guess I should start banning Xerath…? Definitely not what I would have guessed. 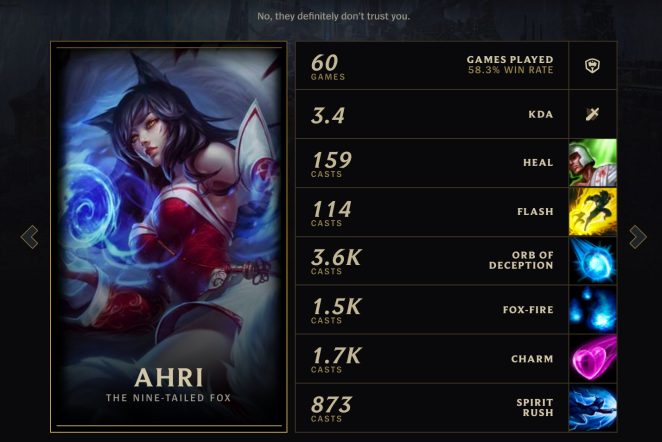 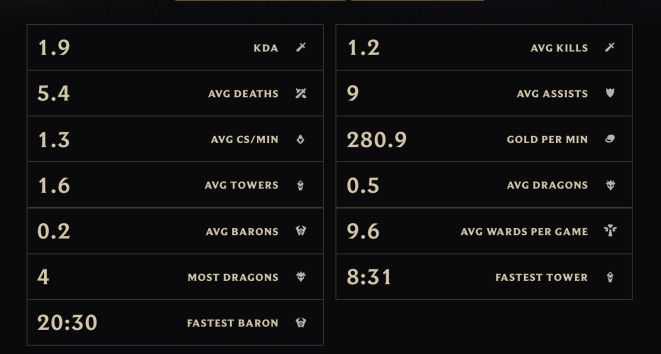 I’d be interested to know how my results compare to yours and others you know! Let me know what your thoughts are.

There will be a new post next week that will focus on my personal life so I hope you’ll come read that – it will be a lot more positive than like…anything I’ve written in the past several months.

Happy holidays – I wish all of you the best (and so does tect!). We will see you back here and on our Youtube channel next week, and on stream in January! Take care of yourselves, travel safe, and if you are having a hard time this holiday season, please know that you’re not alone.